But things are changing. You are running out of time.

After you’ve analyzed your shares and productivity and market saturation, after you’ve re-evaluated, restructured, and revamped, after you’ve made countless acquisitions and integrations, you will be left with the only question that matters – how will you survive without employees?

Loyalty to the company is no longer the norm. So, you have a lot working against you now. And it’s coming from inside the company.

Your employees have been deep in the dream of ‘this is how it’s always been done.’ They are slowly waking up to the fact that the way it’s been done for decades is not the only way. They are realizing that the hard work that provides security only means they get to continue their hard work. Hard work that ultimately provides real security for someone other than themselves.

More and more, your employees are turning to entrepreneurial adventures in the form of start-ups, freelancing, online businesses and even food trucks. They are forming and joining communities of like-minded individuals, while trading in same-minded institutions. Your employees are making a way rather than following a way. They choosing to be free.

The time of working at the same place until you retired or died is over, long over. And the ones who still feel that way are getting old – fast. When they retire, who is going to replace them? The young people today? Millennials are notorious for moving on if they are not getting what they want. When all else fails, they go out and get it instead of waiting for someone to give it to them.

There won’t be a way to convince another generation that security trumps all. People shouldn’t be treated as if they have no other choices.

Corporate, you need to wake up. Your revamped offices and fancy furniture with open workspaces and video games will only hold people there for so long. You will need to constantly look for ways to get people in. But if the same ole still continues on the inside, people won’t stand for it. They won’t sit in your designer chairs for it. They won’t bargain away their personal time and family time and even sick time for it.

When bosses start treating their employees like people, like co-workers instead of doormats, like humans instead of machines, then maybe there will be a chance. Otherwise, where will you be in 10 or 20 years? What will your workforce look like then? Robots? I hope they’ll be up and running in time. 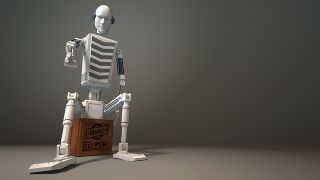